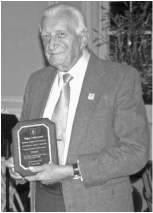 Myron Stebelsky
Myron Stebelsky, 84, passed on to his reward on June 5, 2012, peacefully at his Newark home with his loving wife by his side.

Myron was extremely active in the Ukrainian Community and served as President as well as Board Member of Chornomorska Sitch (UAEA) and the Ukrainian Sports Federation of USA and Canada (USCAK).  His passion was the development of Ukrainian Youth through sports activities.  He spent many years providing leadership and guidance to Ukrainian Children and Young Adults.  He was an integral part of the founding of the SITCH Sports School where he spent numerous summers donating his time and talents to improving the sports skills and social development of hundreds of children.  Myron was an active member of the St. John’s Ukrainian Catholic Church in Newark.

Roman dedicated his time, energy, and heart and soul to his beloved Ukrainian Community, to St. Josaphat's Ukrainian Catholic Church and to his family and friends.  He was elected president of USCAK in 1972 and held that position for 14 years. He will be missed by many.


Marika Prociuk-Bokalo, a longtime swimming and camp activist with the sports club Chornomorska Sitch and the Ukrainian Sports Federation of the U.S.A. and Canada, (known by its Ukrainian acronym as USCAK), suddenly passed away on January 18, 2013. She was 67.

For more than 30 years Ms. Bokalo served as swimming director for USCAK and as swimming director for Sitch. She also served as camp secretary for the Sitch Sports School, now in its 44th year, where she led camp activities, singing, recitations – even working with campers who did not know the Ukrainian language. As a school teacher, she was adept at helping the children to learn.

At the 44th USCAK nationals, Ms. Bokalo led Sitch’s swimmers to win 28 gold and 12 silver medals. In 1991 she helped organize a representative swim team for USCAK at a sports exhibition in the western Ukrainian cities of Lviv, Ivano-Frankivsk, Ternopil and Uzhhorod.

Ms. Bokalo was also a talented organizer for a variety of events, including the USCAK swimming championships at Soyuzivka, which she coordinated with other USCAK members. 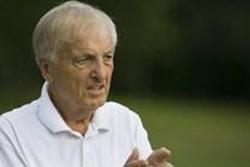 
Eugene Chyzowych known by so many as "Coach C" the engaging, dedicated and inspiring teacher and coach who devoted his life to every player and student he met, died Saturday with his family at his side following a long battle with cancer. Gene Chyzowych was 79.

A resident of West Orange, NJ, Gene was a former professional player, served as head coach of the US men's National team and Olympic team and was a long-time high school coach with one of the top records in the country.

Gene was born on January 27, 1935 in Ukraine, and fled from war-torn Europe to the United States with his parents and two brothers at the age of 13. A soccer player from the start, Gene became a stand out at Philadelphia's North Catholic High School and at Temple University where he graduated in 1963. He went on to play professionally in the U.S. and Canada.

During those early years of soccer in the United States, Gene along with his late brother Walter Chyzowych helped shape the U.S. soccer program.

Together, Gene and Walt started the All American Soccer Camp & Coaching School, one of the first such sport-specific camps in the U.S. in the early 60s, where his energy, enthusiasm and love of soccer influenced tens of thousands of youngsters and aspiring coaches.

In 1963, Gene became a teacher and head boy's soccer coach of Columbia High School in Maplewood, N.J., where he would go on to coach and teach thousands of students over the next 51 years. When Gene retired in 2013, he had amassed a record of 757 victories, which ranks third in the nation all-time high school win list.

He captured four New Jersey state championships, 24 conference titles, 16 state sectional crowns, and produced hundreds of All-Americans, All-State and All-Conference players in high school and college, many of whom have gone on to become college and high school soccer coaches.

Among the countless awards and honors bestowed upon Gene he was most proud of his 2009 induction into the National Soccer Hall of Fame and being the 2014 recipient of the Walt Chyzowych Lifetime Achievement Award. 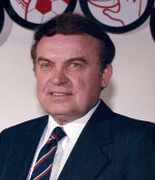 Ihor was born in Litovyska, Sambir, Halychyna, Ukraine. Ihor and his two brothers, Eugene (deceased) and Walter (deceased), along with Ihor’s parents immigrated to the United States in 1949, where they settled in Philadelphia, Pennsylvania.

After high school, Ihor attended Drexel University for engineering but was drafted into the United States Army where he served two years of active duty. After an honorable discharge from the Army, Ihor completed his undergraduate studies at Temple University and followed with a Master’s degree from Penn State University.

Ihor was a member of the Ukrainian Engineers Society of America, many Ukrainian cultural organizations, and an accomplished golfer. During his life journey, Ihor always maintained a passion for soccer; played with his brothers for “Tryzub” and in the late 1970’s was elected president of the Ukrainian Sports Club “Tryzub”.

As president of “Tryzub”, Ihor was determined to bring a higher profile to the organization and in 1978; “Tryzub” found a new home in Horsham, Pa., where it became known as the Ukrainian American Sports Center, fondly called “Tryzubiwka”. It was Ihor’s desire for “Tryzubiwka” to become a facility where men and women of all ages could compete, socialize and develop new friendships.

Ihor’s vision and determination has established “Tryzubiwka" as a venue that thousands of people have visited, continue to visit and enjoy to this day. Through his life challenges Ihor relied on his strong religious foundation that was influence by his great uncle Metropolitan Sotyr Ortynsky and grandfather Father Semeon Chyzowych.