At the General Meeting/Convention the new 2017-2019 USCAK UPRAVA was elected by unanimous vote.  It was recognized that USCAK is the only legal USCAK organization in the world. 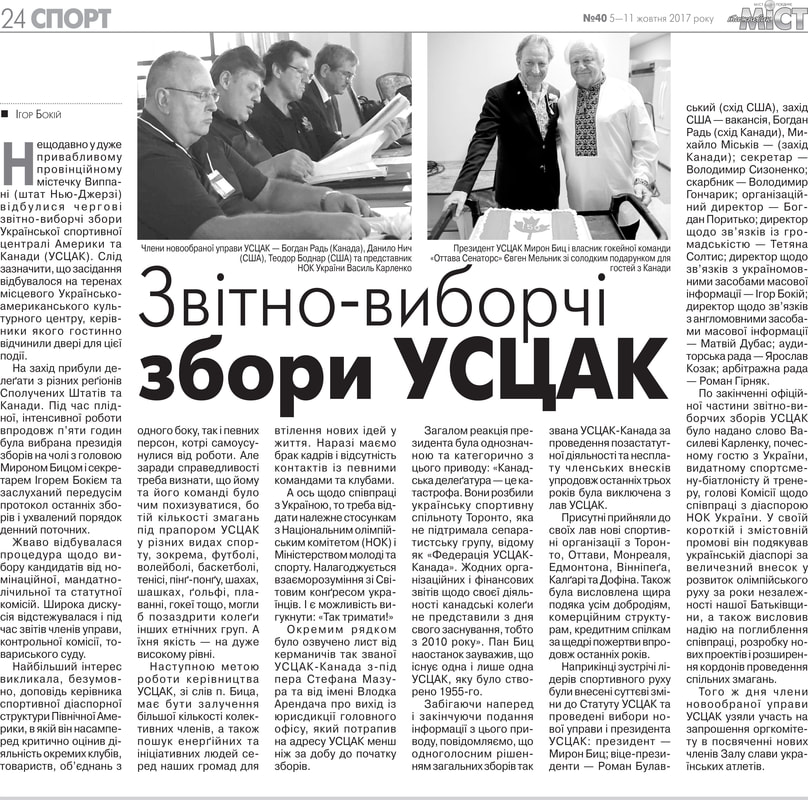 WHIPPANY, N.J. – The general meeting of the Ukrainian Sports Federation of the U.S.A. and Canada (known by the acronym USCAK) was held on September 16 at the Ukrainian American Cultural Center of New Jersey, where board directors presented their reports and a new board of directors was elected.

The meeting attracted delegates representing various sports organizations from across the United States and Canada. Following nearly five hours of reports, a meeting presidium was selected, headed by Myron Bytz, USCAK president, and Ihor Bokiy, Ukrainian-language press secretary. The minutes from the previous meeting were read and this year’s meeting’s agenda was outlined.

A lively procedure ensued in selecting candidates to the nominations, elections and by-laws committees. Further discussions continued, following the reading of reports by the board members, reports by the auditing committee and the arbitration board.

The most interest was generated by Mr. Bytz’s explanation of USCAK’s internal structure. Mr. Bytz was critical of the activity levels of certain member sports clubs and organizations, which had decreased in recent years. During the meeting, USCAK leaders described the various sports events the federation had supported, including soccer, volleyball, basketball, tennis, table tennis, chess and checkers, golf, swimming and hockey. They noted that the competitions were held on a very high level.

USCAK has been invited to work with the National Olympic Committee of Ukraine, Ukraine’s Ministry of Youth and Sports, as well as the Ukrainian World Congress, Mr. Bytz noted.

As part of separate business, the issue of “USCAK-Canada,” was discussed based on a letter of resignation from the board of directors that was written by Stefan Mazur (central vice-president) and Walter Arendacz (president). The letter was distributed prior to the USCAK general meeting.

Mr. Bytz reminded the gathering that there is only one USCAK, which was founded in 1955.

Following the latest information presented regarding USCAK-Canada, the meeting voted unanimously to condemn the activities of USCAK-Canada in contravention to the organization’s constitution and by-laws, and its failure to pay its dues for the previous three years.

Other Canadian sports organizations that have joined USCAK and were present at this meeting were from Toronto, Ottawa, Montreal, Edmonton and Calgary (Alberta), and Dauphin and Winnipeg (Manitoba).

Mr. Bytz cited the work of volunteers, the donations from corporate sponsors and the financial support of Ukrainian credit unions, thanking all for their contributions.

Finally, the USCAK leadership voted for changes to the by-laws and held elections for the new board of directors.

Following the formal business portion and elections of the USCAK general meeting, Vasyl Karlenko, an honored guest from Ukraine who is a well-known biathlonist and trainer, and a member of the committee for cooperation of the National Olympic Committee of Ukraine with the disapora, thanked the Ukrainian diaspora for its support of the Olympic movement in Ukraine since it regained independence in 1991. Mr. Karlenko expressed hope to further and deepen this cooperation, with the proposal of new projects that transcend borders in the name of sports competition.

Later that day, members of the newly elected board of directors were invited to attend the induction banquet for the new members of the Ukrainian Sports Hall of Fame that was held in Whippany at the same location.

For more information about the Ukrainian Sports Federation of the U.S.A. and Canada, readers may visit www.uscak.org.